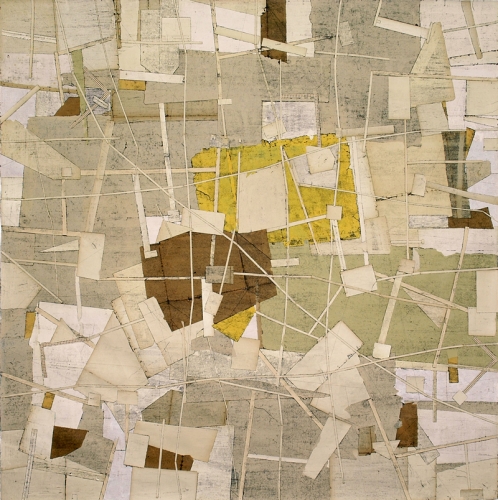 Over the past few years, the Yerevan-born, Berlin-based Sam Grigorian has generated a remarkable body of collage -- remarkable not only for the delicacy of its tonality and the power of its non-objective imagery, but for its dramatic engagement of size.  We think of collage as a particularly intimate medium, but by working entirely with non-referential forms and assembling them into neo-cubist compositions, Grigorian is able to work on an abstract expressionist scale.  Indeed, the larger his work, the more powerful, not only because of its breadth, but because of its rhythmic and sensuous command of lateral space and expansive surface.

Although incidental references to such notational factors as writing and musical notation recur in his work, Grigorian is principally interested in texture, structure, and muted coloration, that is, in the color and shape of paper-from fine letter paper to parchment-itself.  He achieves a relatively uniform (if still vital) "skin" by layering, treating, and scratching away outer layers.  Not preoccupied with qualities of weathering, he still subtly depends on them to achieve tonal balance from area to area.  The bigger the work, the more it becomes a map or topography, regions defining themselves and roads and borders emerging to connect them.  Color, even in the most decorative arrangements, enters quietly and maintains a respectful subordination to composition.

In his smaller works, Grigorian plays more traditionally with collage elements, and with language.  In their artfulness and playfulness, these pieces are hardly less persuasive than his mural-size works, and their constrained size does make them more approachable.  But their images and conceptual preoccupations are more familiar, more in line with what we have expected from collage over the last century.  The vision and ambition manifested in the large works, by contrast, are as unanticipated as they are stunning.