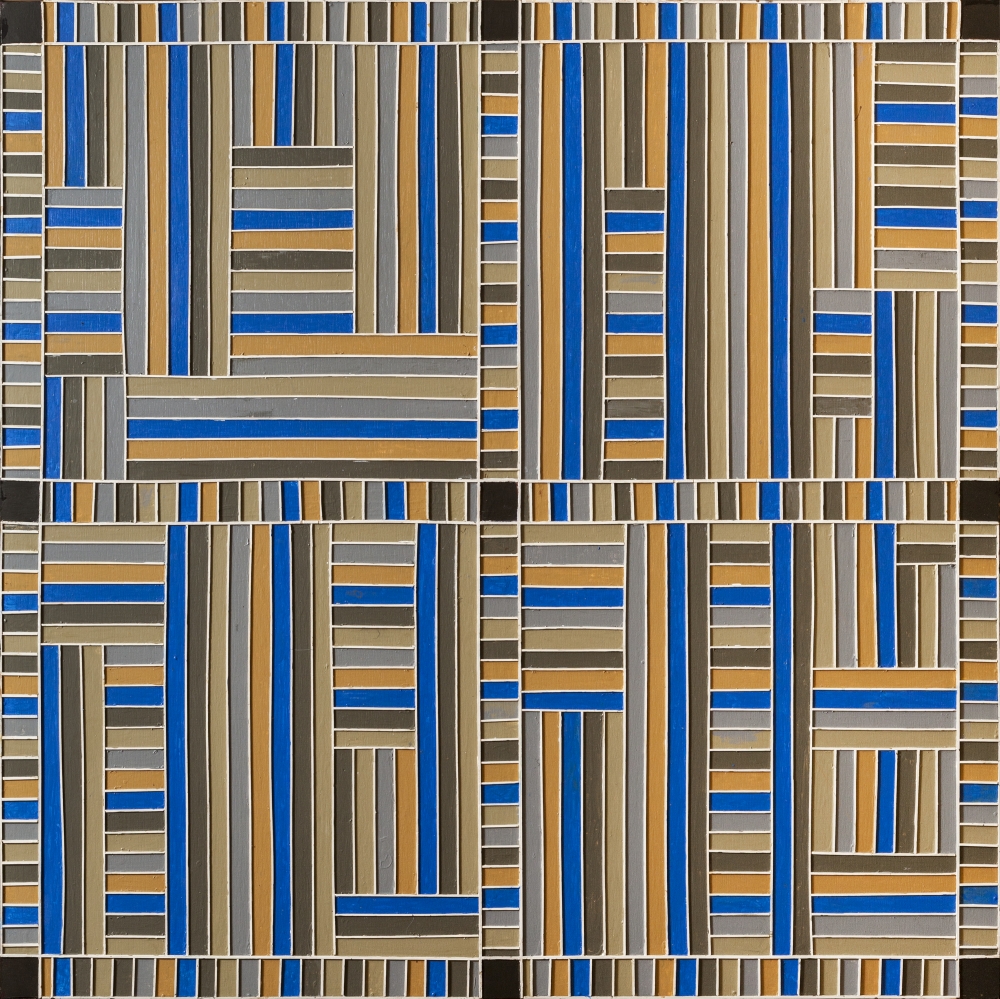 A distinguished painter and draftsman, Antreasian is also a pioneering lithographer, highly respected and renowned in the printmaking world. His contributions to American art have been well-documented and place him alongside the great innovators of mid-20th-century American art.

Antreasian joined June Wayne and Clinton Adams as the founding Technical Director at the Tamarind Lithography Workshop in Los Angeles in the early 1960s, and later at the Tamarind Institute at University of New Mexico.

Antreasian’s prolific career began under the tutelage of Will Barnet and Stanley William Hayter. Stylistically, Antreasian’s work has evolved from regionalist American scenes to abstract expressionism, subsequently to more iconic, hard-edged abstraction, and, finally, to his monumental geometric paintings. Antreasian has continuously pushed boundaries. He invented the “rainbow roll” — the continuous-toned ink process — and was a pioneer of printing on metallic foil and Mylar as well as embossing and de-bossing.

Antreasian’s paintings, drawings, and lithography prints are included in over 60 museum collections including LACMA, Norton Simon, Metropolitan Museum of Art, and the Museum of Modern Art.

In his essay titled “Garo Antreasian: The Printer as Painter,” art critic Peter Frank wrote, “Garo Antreasian is one of America’s senior artists. This appellation applies not only because the 95-year-old, New Mexico-based Antreasian is still hale and active, but because he has been a notable presence in our country’s artistic discourse. Considered one of the pioneers of contemporary printmaking worldwide, Antreasian not only helped spearhead the revival of lithography in 1960s America but did so by introducing innovative elaborations and updates to the 19th-century technique. Further, his decades of pedagogy have bred several generations of adventurous and independent-minded artists. And, of course, Antreasian’s own artistic output has made a rich contribution.

“That contribution, dating back to the 1940s, has always derived from a wide variety of sources, visual and cultural. At heart it is as intimate, as dependent on personal experience and sensation as is that of any truly passionate artist. But its stylistic and iconographic associations range broadly, from the “American scene” painting predominant before World War II to the pan-Asian formal influences Antreasian absorbed during extensive travels made just before and during his retirement from teaching. Even at its most non-objective and esoteric, Antreasian’s is an art of observation and response, a meeting of outside impression and inside impulse. His artwork is at once image, notation, and experiment, a constant examination of what happens when an oblique approach is taken to a particular subject, when a special tweak is applied to a borrowed structure.”

William Peterson, an Albuquerque-based art critic, wrote, “Garo Z. Antreasian belongs to a maverick generation in American art. He was born in 1922, the same year as Richard Diebenkorn, Grace Hartigan, Beverly Pepper, Leon Golub, Leonard Baskin, and Jules Olitski, and just a year ahead of Ellsworth Kelly, Sam Francis, Roy Lichtenstein, and Larry Rivers. This is a generation of singular artists who occupy a difficult position in the history of 20th-century art.” Peterson has gone on to state, “Although Antreasian has always been a painter of extraordinary versatility, as well as an incisive draftsman of bite and power, he is best known for his contribution to printmaking. In the 1960s and 70s, he did as much as anyone to regenerate and revolutionize the art of lithography in this country, expanding its technical range, training a new generation of master printers, and building an impressive body of brilliant and masterful prints that stand as a benchmark of achievement in the medium.”

Tufenkian Fine Arts is pleased to launch its new location in late Fall 2017 with the exhibition A Retrospective: Garo Antreasian.