Tufenkian Fine Arts is pleased to present Serj Tankian: The Incandescent Pause, an exhibition featuring selected works by the artist Serj Tankian. The exhibition will run from Friday, July 2ndand will be on view through Friday, July 16th. We are thrilled to announce that this will be the artist’s first show with the gallery.

A poet, songwriter, visual artist, activist, composer, and lead singer for System of a Down, Serj Tankian has always created music as an outlet to express his thoughts and feelings with a level of passion and consciousness that few in today’s world of music can rival. An Armenian born in Lebanon and re-rooted in Los Angeles, Tankian was introduced to the melding of cultures, philosophies, and ideals from a young age.

In recent years, Tankian has split his time between holding a microphone and a paintbrush, having feverishly created over sixty pieces of art since the beginning of 2013. His journey into the world of fine art began with his Disarming Time Musical Paintingswhich were exhibited at Project Gallery in Los Angeles. The artworks in The Incandescent Pause present the viewer with a unique audible and visual experience, as each piece is accompanied by a musical score which remains as integral to Tankian’s artistic expression as the paint on the canvas. The forms in Tankian’s artworks thoroughly explore the space and convey complex relationships, much like the intricacies present in the artist’s musical compositions.

As Tankian explains it: “The title of the exhibition serves as a visual reference to the involuntary social isolation experienced by our species recently. Nature has sent us to our rooms as we’ve failed in our vision as caretakers of the Earth. Time for a new way of co-existing, one that elevates the quality of all lives while lowering our lifestyle footprint. We can no longer afford to measure our value in economic growth. We must measure our value in the growth of our culture and happiness”.

Influenced by the Russian Expressionist painter Wassily Kandinsky’s theories on color and synesthesia, Tankian explores the themes of movement, tone, dissonance, harmony, and chromatics to create his incredibly dynamic and expressive works. Synesthesia describes the production of a sense impression relating to one sense or part of the body by stimulation of another sense or part of the body. The relation between both our visual and auditory senses informs our interpretation of the artworks. The embedded musical score that accompanies each piece in the exhibition are accessed via Arloopa, a mobile application that utilizes optical recognition technology to allow users to listen to each painting by way of audio headsets. 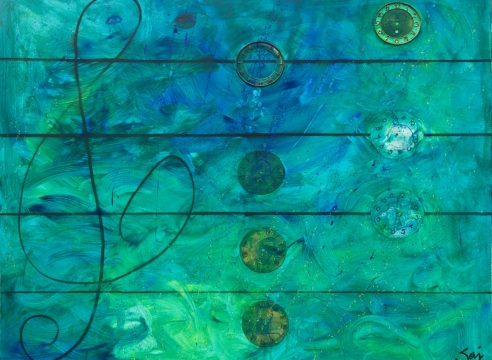 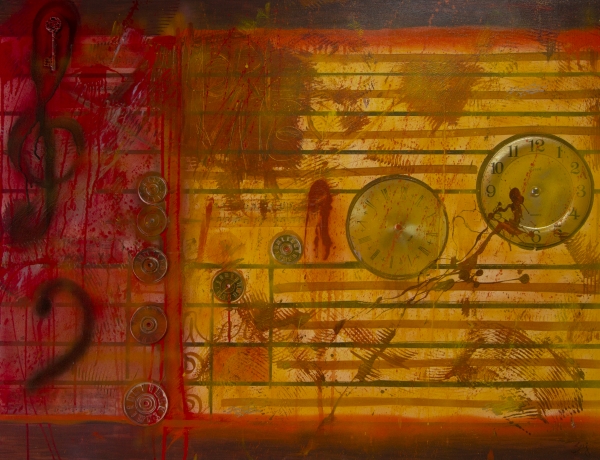