1998    “Take It,” Center of Modern and Experimental Art, Yerevan, Armenia

2005    The President of the Republic Prize for Armenian Fine-Art

Arshak Sarkissian was born in Gyumri Armenia in 1981. He studied art at the National Aesthetic Center for Art in Yerevan, Armenia in 1998. In 2001, he continued his studies at the Postgraduatory Cyprus College of Art in Paphos, Cyprus.

In 2005, Sarkissian was awarded the President of the Republic Prize for Armenian Fine Art.

Since 1997, Sarkissian’s artwork has been shown at multiple solo and group exhibitions around the world. His art is about the contemporary man, refracted through his imagination. His main task is creating figurative, modern art. He believes his characters are born in graphics and continue their lives in painting or sculpture. As an artist, he explores human behavior, trying to get to their core personality.

My art is about the contemporary man, refracted through my imagination. My main task is creating figurative, modern art. Although I appeal to classic artistic media – painting, graphics, round sculpture – I try to incorporate in the classics the hue-and-cry of the modern world, including its complexity and controversy, while depicting the modern man in his fantastic displays. But I was greatly influenced by Renaissance art, especially the artist’s constant urge to master their artform, but more specifically, their meticulous approach to drawing, because my characters are being born in graphics, and if it is successful, they continue their lives in painting or sculpture. The other important factor that attracts me in Renaissance art is the synthesis of elements of real and magical.

I am convinced that the world is pluralistic, that it is not limited by physical reality. There are many worlds that are just as real and true as the physical reality we live in. Both real worlds and human nature are diverse. It includes both the human and the inhuman, the unnatural and the natural. The latter connects man with other realities, like a shaman in his witchcraft links himself with the nature and supernatural forces. Through my imagination I see that connection with animals, plants, and eccentric creatures.

Animals play a big role in my paintings, bringing extra expression with them. Human and animal hybrids appear often in my artwork, such as the humanoid creature with bird's head. Their dress and hairstyle are greatly important in the process of accentuating their exoticism. All this, when incorporated together, express my internal aspirations for changes to be made and the, soon to be created, new art.

As an artist I am keen to explore human behavior, trying to get to their core expressiveness that I consider to be their personality. I am looking for people who create their personality by telling their own story innovatively, who have different layers in them, people who experiment and deliberately go out of the way to change themselves for the better. These experiments make the personality either monsterous or a hybrid with elements of fauna or flora. 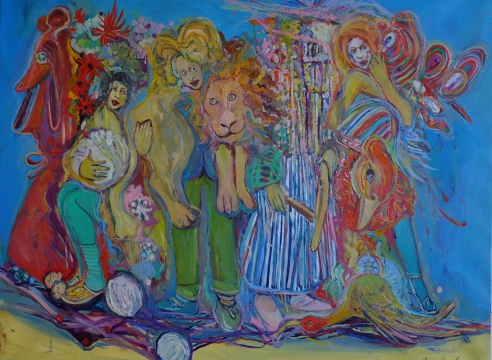